Arts Jam is a Wild Success 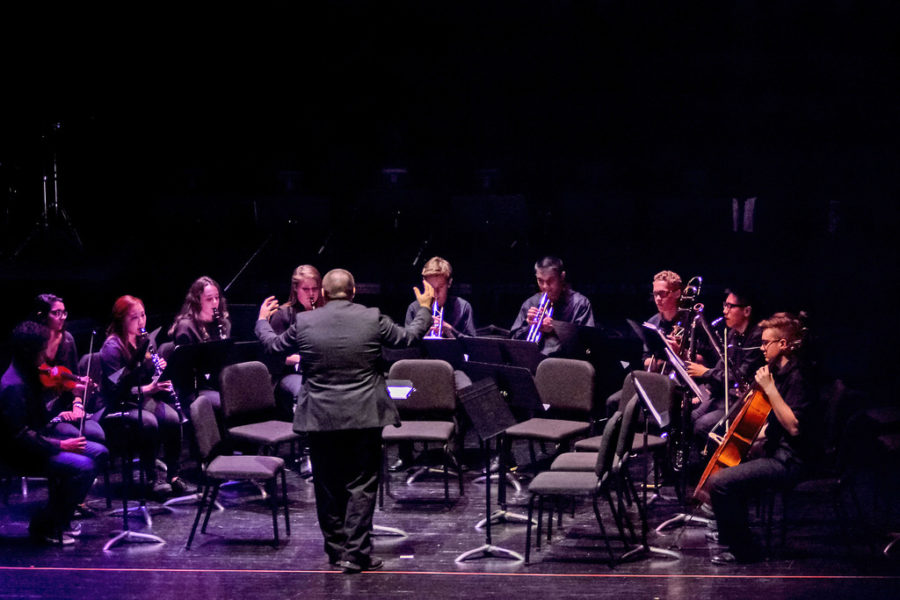 On Wednesday April 25, over 160 students from the Flint Hill Performing Arts Department participated in the annual Arts Jam concert at George Mason University’s Center for the Arts. Friends, family, faculty, and everyday spectators turned out in droves to the show to catch a glimpse of what Flint Hill’s Performing Arts department has been working on. This year was particularly special as over 1,000 people were in attendance, breaking Flint Hill School’s record for the largest crowd to ever attend the show.

Leading up to the performance, artists had to adhere to rigorous schedules consisting of after-school and F-day rehearsals, and sometimes had to miss academic classes to rehearse during the school days– all of which was done amid the pressures of regular life, academics, and family obligations.

Senior Kamryn Olds talks about the difficulties Choir had preparing for the show this year: “This year was actually a bit harder for choir because our winter concert was after Winter Break, which is not always the case. So, we only had three months to prepare. However, in those three months, we really worked hard to learn our music and get it as perfect as possible.”

The nine performing groups for this year’s show were the Orchestra, Jazz Band, Symphonic Band, Concert Choir, Symphonic Choir, Major Minors (Flint Hill’s a cappella ensemble), Percussion, and Dance. Many of groups participated in performances together, so Dance, Choir, Orchestra, Band, and Percussion ended up spending extra time perfecting routines that were to be performed alongside one another on stage.

Senior Patrick Lovelace, a member of Orchestra and Jazz Band, also spoke of his experiences preparing for this year’s show.

“Rehearing this year was pretty intense. Since I’m in orchestra and jazz band I have to divide my time between those two ensembles, and to be honest, I felt a little underprepared for the concert,” said Lovelace, “However, by the day of the concert I felt pretty good about what we were playing, and I thought the concert went really well. I’m proud of how we played and I thought all the other groups and ensembles performed really well too!”

This performance is made possible due to Flint Hill’s long-standing relationship with George Mason University which allows for the school to have access to the amazing facilities and opportunities offered by the university. It adds an extra sense of importance and professionalism, something that would be very difficult to achieve if the school simply used the Olson Theatre on the East Campus for the show.

Senior Carla Atalla, a member of Symphonic Choir and Major Minors, reflects on her final year performing at Arts Jam after performing in it for four years: “I’ll say this was probably the quickest and best Arts Jam I’ve ever been a part of; it was my last time and I just didn’t want it to end. Everyone was so dedicated to making [the show] the best it could be and the audience was awesome this year!”

The show was special, not only for those students who performed, but also for everyone who had the pleasure of partaking in the show from the audience’s perspective.

Upper School History and Social Sciences teacher Caroline Helmers spoke about her awe and excitement at having the opportunity to see so many students perform.

“I was really impressed at the talent of everyone! I thought that they all did a phenomenal job and I was just really excited to be a part of Flint Hill because there was so much talent amongst the student body.”

Every year, Arts Jam has a central theme, and this year’s was “Collage.” Each branch of the Arts Department had their own specific arrangement of acts, but they all came together during the show-stopping finale piece, which was a medley of songs by Led Zepplin.

Sophomore Avishka Boppudi described her hopes for the future of Arts Jam. “Next year I hope we can do another excerpt from the musical [which is planned for next spring], and I also hope that Major Minors, which I am a part of, will do just as good as it did this year!”

As can be seen, Arts Jam is a very important event for the Arts Department at Flint Hill. Bringing together nearly all of Fling Hill’s performing arts, it provides an opportunity for the student body, faculty, and families to witness the talent of many of Flint Hill’s students, and it uses its platform to encourage people to visit other Arts events, such as the upcoming Upper School play Feiffer’s People, which will premiere later this Spring.